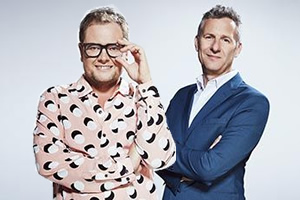 Adam Hills and Alan Carr - Stand Up To Cancer interviews

Adam Hills and Alan Carr talk about preparing to host Stand Up To Cancer 2018, which is on Channel 4 this Friday. 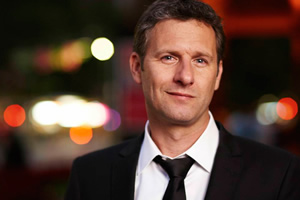 Adam Hills talks about the stresses involved in presenting The Last Leg live, and why his new stand-up DVD is about the idea of laughing in the face of death.

Hills tweeted the good news: "I'm so honoured to be an Ambassador for @RLWC2021, excited to promote the sport, and so impressed with what Rugby League does for the Community."

The Australian comic has found physical disability rugby league with Warrington and hopes to appear in a world cup next year.

Adam Hills to have prostate exam on live TV

Adam Hills, who presents hit show The Last Leg, is going to be given a prostate exam live on tonight's Stand Up To Cancer special.

Defending The Guilty, Feel Good, GameFace, Mum, Sex Education and Stath Lets Flats are amongst the nominees for the Edinburgh TV Festival Awards 2020.

The lighthearted TV responses to lockdown have been abundant so far, from video-linked episodes of Have I Got News For You to Matt Lucas's sketches and Grayson Perry's Art Club. Yet, none have quite managed to capture the mix of anxiety, uncertainty and unexpected humour many of us have been experiencing - which is where The Last Leg comics come in. Live from Melbourne, London and Huddersfield, the trio will present their typically incisive take on the week's events.

Adam Hills has received the ultimate accolade. His picture is now on a stamp. He can now say that he is worth $1.10.

Adam Hills has met Prince Harry at Buckingham Palace and received praise for his beard.