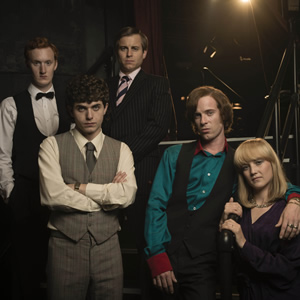 Luke Treadaway who plays Alex Higgins in The Rack Pack, Will Merrick who is Steve Davis in the comedy and Kevin Bishop - aka Barry Hearn - appeared at a screening alongside director Brian Welsh, writer Shaun Pye and executive producer Peter Holmes - to talk about making The Rack Pack. Here's what they had to say to interviewer Jim White...

Why make this film?

Shaun: I used to watch snooker with my Nan and it was very much the Cavaliers vs the Roundheads thing. She used to love Alex Higgins and she hated Steve Davis. [Does an impression of his Nan:] "Robot! Robot! Boring!". 20 years later, I got to work with him on They Think It's All Over. I went back at Christmas and said 'I met Steve Davis. You know what? He's one of the funniest, nicest, most genuine, warm-hearted people... he's the nicest man you could meet' And she went "I hate him! Robot! Boring!". It was at that moment I realised if that could endure 20 years, and my Nan could still harbour this love of the Cavaliers vs the Roundheads, then it might make a film.

There's some great lines in that film, that one when they're waiting to come out and Davis says "I hope I win so you can stop celebrating the last one" - yours, or was that out there?

Shaun: That was one of ours, but there's a mix, a lot of the dialogue is taken from stuff that we've seen or read and Barry's contributed to the script, I have to say. Some of the Barry-isms are his, and others taken from various places. It is a hybrid.

The film lasts 80 minutes, but when you were approached about how to make this film about snooker, how do you set about it?

Brian: I think snooker really lends itself well to the screen, because there's a psychological intimacy to the game. You can really see on the player's faces how they feel about each other and Higgins at times would be seething with hatred towards Davis and the concentration. The first draft of the script didn't have that much snooker in it because we weren't sure how we were going to realise it, but it was something I was really keen to bring to it.

Sport writers always go on about how sport doesn't have the characters it used to have in it, but it is true isn't it, in this case?

Brian: Yeah, I think that's what this film is about, it is about a certain sanitisation of sport personalities. I think it would be very hard for a character like Higgins to succeed nowadays.

Kevin, how much did you study the man himself [Barry] and how much is it a general character that fitted the plot?

Kevin: I can see him from here, he is in my peripheral and he seems to be smiling [laughs]. I remember TV appearances from Barry when I was a kid, but I couldn't remember that much as I was born in the 80s, so I started to watch a lot of footage. And it was brilliant, and it really helped. I've just met him for the first time today, and I thought in real life he would be more subdued, but he's more Barry Hearn than Barry Hearn! I wish I'd gone bigger! 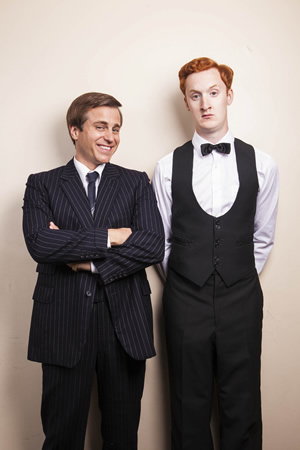 How do you set about researching something like this?

Will: I don't remember snooker being a massive deal for me growing up, I didn't watch a lot of it, but my granddad did and it was always on in the front room, a sort of smokey front room. So I suppose a lot archive footage and there is still loads of footage of all of these amazing moments online, it's all there at your fingertips.

And how much coaching did you have, because you were actually putting a lot of those balls down weren't you?

Will: I was, yeah. We had a coach, and it was a really interesting thing for all of us, we literally had no idea. I mean I'd picked up a pool cue before but the real challenge was playing like these players; we had to completely embody their physicality and technique, which is so alien when you've got your own technique, we've all played a bit of pool so you naturally have an assumed position. Moving your body like that, I was aching just after a few hours of training from moving in these odd positions that Davis played like. It was very specific.

So you were in a snooker hall with someone with a cue on your head?

Will: Absolutely, yeah. We did the white ball up and down, that's for real. Some of the shots are real.

Brian: Yes, some of the shots are for real. For example, the two shots, the blue and the pink, in the 81 scene, Will potted them.

Can I ask, that magnificent sequence of the semi-final, was that one take?

Brian: One take yeah. A lot of rehearsing.

Jim: Higgins always claimed, I don't know if it is true, but he had been told that he could have been a ballerina. And you got that, you got that way he dances around the table?

Luke: He had a sort of grace about him, the way he moved and the way he walked around the table. It was like a dancer. Like Fred Astaire or something. And very very different to other players.

What about your snooker before you started filming?

Luke: I thought I was alright at pool but then I met up with our coach Tony and it took him about 45 minutes before he even let me hit a ball! It is much harder than you think, really tricky.

And how much did you know about Higgins before?

Luke: Not a lot, I never watched snooker at home as a kid but obviously when I got the part I read his autobiography, watched lots of documentaries and devoured YouTube. There's so much out there and there are so many conflicting stories, you know, there are scenes where if you listen to Lynn, it'll be one version, if you listen to Alex, it'll be another. This is not meant to be fact by fact, line by line, it is not a historical document. It's a way of leaping off and saying let's tell a story of these people's lives, use our imagination and create versions of events. It is very interesting.

Was Steve Davis' success a contributing factor to Higgins troubles?

Shaun: To a degree, Higgins is such a complicated character and there is a self-destructiveness about him that would have manifested itself whatever. But I think certainly what we're trying to say in the film is that Steve's success on the table, but more importantly off the table, is a contributing pressure on Alex that is driving him forward. I think he had some demons before that though. 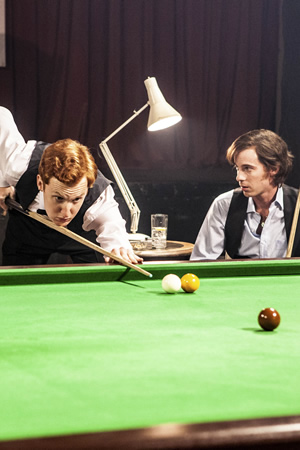 I want to go back to that extraordinary sequence in the semi-final, that was all one take? That's not a snooker double, it is you?

Luke: I think in the end we got one long take of it all yes. And no, I don't think there was a body double on set was there? It is me!

Brian: We discussed Higgins moving like a dancer and we were really keen to take that sequence, to take the greatest break in snooker history, and treat it like a dance sequence. To choreograph it was really complicated, we shot the movement with a steady cam and Luke, and we just rehearsed the sh*t out of it. It was a lot of fun doing it.

This is going out exclusively on BBC iPlayer, why isn't it airing on linear TV?

Brian: I think more and more people seem to be watching really high quality content on various different devices and having worked in shows on the main channels, there was a creative freedom afforded on this that was just a gift. The ambition was to make a proper film, regardless of what device it will be screened on, and it can only be a good thing if that frees us up to do more creative things and not feel constrained.

Peter: I think one thing that was very liberating was that you don't have that concern about duration. Were we making this for BBC Two or BBC One or whatever, we'd have to fill an hour slot most likely. I think our original draft was probably 100 minutes or something. With BBC iPlayer, we could go in knowing the film could be exactly the length it needed to be and as a result it's a better piece of work.

I don't really watch stuff when it goes out anymore. We all watch catch-up television. The idea that BBC iPlayer is just the place where you go to catch up on stuff from proper television isn't really true at all anymore. It is a place you go to find great content.

Luke and Will, did you ever play off camera together? Who is the best snooker player?

Luke: It was a good thing we had a snooker table on every single set [laughs]. We played a few times together; I was definitely the worst out of everyone! Sometimes I was alright.

Who was the better snooker player, Alex or Steve? What do you think?

Luke: It depends what you call 'best', really. I think they are very different and Steve was obviously more consistent and won more, but I think what Alex did for the sport and the way he played it injected something into it that it didn't have before. And I think if you took a single shot of Alex's at his best and put it next to a single shot of Steve's, I think Alex's shot would be completely amazing and unlike anything anyone has ever done before.

Barry Hearn (from the audience): You're completely right. Alex Higgins took on shots that no one else would try, and Steve Davis was a winning machine. It is hard to say who the better player is.

Will: I know that Steve himself has said that when Alex was at his best, he was the best in the world. But obviously when he played badly, he played very very badly.

Luke: What you don't see nowadays, at the level sport has got to, is the Ronaldos or Messi being out on the lash the night before! I'm not encouraging that but I think that's what you had at that time; you had snooker coming onto TV and the best most maverick player being some days genius, and some days like he wasn't there at all. And that is very rare now. Positives and negatives I suppose.

The Rack Pack is available on BBC iPlayer until 2017. Watch.