It has been announced today that the first British sitcom project has been successfully financed via the Kickstarter crowd funding website.

Kickstarter, a website via which fans can pledge money towards a project they want to see made, has been running in America for a number of years, successfully finding funding for various technological and creative projects. The website launched to UK creators on 31st October, and less than a month later the first British sitcom has emerged fully-funded.

A Brief History Of Time Travel is an audio series based around three people stuck in the past with a broken time machine. It will follow the adventures of Eric Street, a time-displaced accountant; Miles Wanderlust, a mad inventor; and Nina Seventeen, the special agent tasked with bringing them to temporal justice.

Created by James Hunt and Seb Patrick, the six 30-minute episodes will now go into production as the project has passed £4,000. At the time of writing 109 people have pledged an average of £37 towards the project. 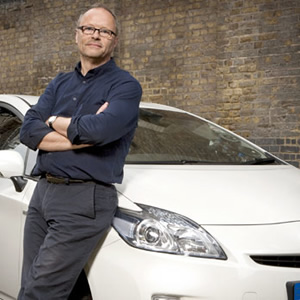 The creators say: "Following a tradition set by British sci-fi sitcoms Red Dwarf and The Hitchhiker's Guide To The Galaxy, the series sees the characters thrown into a new period each week as they attempt to get home without damaging the timeline."

James Hunt says: "We're genuinely flattered that so many people have already taken a chance on bringing our idea to life, and obviously it doesn't hurt that the very generous Robert Llewellyn agreed to appear. Red Dwarf is definitely one of our primary influences on this project, so we feel unbelievably lucky to have such a direct connection to it."

Seb Patrick adds: "If people are interested in listening to the show then they can still pledge on the Kickstarter page before the shutters come down on November 30th and production begins. All the money is going into the production - James and I are working for free on this because we really believe in the project.

"The series will be available to buy eventually, but all Kickstarter backers will get a free, exclusive prequel episode as well as the opportunity to pledge for other, more tangible rewards, such as a script-book or even a producer credit."

The show's Kickstarter page explains more about the aims of A Brief History Of Time Travel and what fans will get if they pledge money. It also features 'Case File' images giving an overview of the plot and characters.

BBC radio stations have, until recently, been almost exclusively responsible for original British audio comedy programmes. However, the Kickstarter funding news comes on the same day that Rik Mayall has released a new audio comedy, The Last Hurrah, as an online download.

A number of British comedy projects are now being added to Kickstarter. Others current seeking funding on the site include The Fitzroy, an ambitious live action, black comedy feature-film set in an alternative post-apocalyptic 1950s on a submarine hotel; and The Barstewards, a late-night animated sitcom based around a family who have taken over a bar at a seaside town.

See Also: How to fund your comedy project via Kickstarter