Jack Whitehall's Travels With My Father is returning for a fifth series on Netflix, British Comedy Guide can exclusively reveal.

And this time, the comedian and his father, former showbusiness agent Michael, will be touring the UK, BCG believes.

It is thought that the pair will visit Scotland, Wales, the Lake District, Devon, London and other locations around the South East of England in the new episodes. Pre-production is currently underway and filming is expected to begin next month.

A spokesperson for Netflix confirmed to BCG that the series will air later this year.

Speaking to United Arab Emirates newspaper the Khaleej Times ahead of three stand-up gigs in Dubai, Whitehall said in January: "Hopefully we'll be able to do one more [series]. I think it would either have to be the UK or Antarctica. I know where I'd rather go but it feels like a negotiation I might lose. It'll end up being us just going around the Home Counties."

Produced by Tiger Aspect and Cave Bear, there have been 15 episodes of the comedy travelogue so far.

In the first series, published by streaming service Netflix in 2017, the Whitehalls visited Thailand, Cambodia and Vietnam. The second series, released the following year, followed them across Eastern Europe, while the third, in 2019, took in a trip to California and Arizona. Last year's series was filmed in Australia.

The US and Australian series consisted of only two episodes each, but the number of locations the pair are visiting and their relatively close proximity to each other suggests that Series 5 could be longer.

The commission consolidates Whitehall's relationship with the streaming giant, who also released his 2019 festive special, Jack Whitehall: Christmas With My Father and stand-up specials At Large in 2017 and [g=9872]I'm Only Joking[/s] in 2020.

In November, Whitehall donated £6,000 to Manchester's Frog & Bucket comedy club to help keep it in business after it was snubbed for Arts Council covid bailout funding, saying: "'I started my career at this club, I wouldn't be where I am without their support, government deemed it not 'culturally significant'. I think a lot of people beg to differ."

Thanks to further donations, the club, which celebrated its 27th birthday last week, has been able to invest in equipment for it to host online gigs, which began with an all-female bill for International Women's Day on Monday.

Whitehall recently shot a UK-based series of A League Of Their Own Road Trip, Loch Ness To London, for Sky One. Also featuring Romesh Ranganathan, Jamie Redknapp and Freddie Flintoff, it will air later this year. He is also attached to the forthcoming comedy-science-fiction film Robots, in which he plays a womaniser forced to team up with a gold digger and learn humanity as they pursue robot doubles of themselves.

Emma Roberts (We're The Millers) is also attached to the feature, which is written and directed by Sacha Baron Cohen's regular collaborator, Anthony Hines (Borat Subsequent Moviefilm, Bruno), who wrote the screenplay with the Danish comedian Casper Christensen. Host of the Danish version of Shooting Stars, Christensen is best known internationally for the sitcom Klovn (Clown) and its subsequent movie spin-offs. 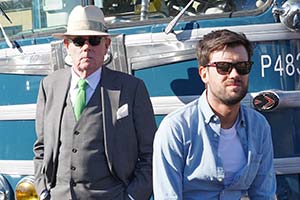