The BBC are piloting an improvised comedy with Snapchat comic Stevo The Madman, British Comedy Guide can reveal.

The enhanced reality project is similar to the online videos that Stevo, AKA Kevin Stephens, has released featuring his actual family and following his supposed day-to-day life, most recently in the Stevo The Dad Man series.

The "digital story teller" and former professional footballer for Leyton Orient developed the script with Javone Prince (Maxxx, The Javone Prince Show) and shot a non-transmission pilot for BBC Three in September.

Director Leo McCrea (Mortimer & Whitehouse: Gone Fishing, Jack Whitehall: Travels With My Father) has described the filming process as "scripted story beats [on which] we improvised the material. Laying takes on takes and developing gags".

One storyline in the BBC Studios-produced project found Stevo desperately trying to persuade Chris Eubank to come to his daughter's birthday party, after famous friends such as Big Narstie turned him down.

The ex-boxer and the online comedian - who has more than half a million followers on both Instagram and Facebook, and has leveraged his popularity with his "Spartan" fans into becoming an influencer, boasting brand deals with companies such as JD Sports, Iceland Foods and Turkish Airlines - recently collaborated on a Christmas advert for KFC:

McCrea and Stephens previously worked together on a 2019 episode of Come Dine With Me, in which the comic hosted a Caribbean-themed Christmas dinner.

He conceived the Stevo character while working as a breakdown recovery driver, filming his day-to-day life as a "van man". Since 2016, he has hosted the popular football punditry series Take A Bow on YouTube with Craig Mitch, appeared on Celebrity Coach Trip and was part of the BBC's presenting team for last year's coverage of the NFL Super Bowl.

He also appeared on the second series of The Big Narstie Show in 2019, discussing his online presence and upcoming projects with the rapper and his co-host Mo Gilligan.

However, the prolific Stephens subsequently shared his frustration over the pilot's production process with Gilligan, when he appeared on his podcast in November.

"TV is just slow," he told the stand-up, who himself first built his audience with a series of YouTube sketches. "For instance, with my Snapchat show we done last week, I shot six episodes in three days. With the pilot, that was three days and we got one episode.

"We done a family meeting say, we were buzzing off each other. Then we stop, set up the next room, lunch, girls are in their room, waiting, yawning, I've got to go and wake them up. This ain't how we're used to working. It was mad.

"As much as I love the thought of TV and it looks good for what people think, the money's not great. If I give the same amount of effort I just gave for that production company to do that show with my own people, I'd probably get about 15 pieces of content."

He added: "It looks alright but it's not the raw. I want it to be everything I started as. But I know I can't. My argument I'm having with them is that I want it to be a sitcom, rather than you say, it's a reality [show]. Because I want people to see that this sitcom looks real because it's from my real life, it's my real friends. It's real but we have written elements in it."

When Gilligan tried to define the pilot as a mockumentary, Stephens replied: "Well, it is but it's really not because it's my life. What we've done and what we do with my Snap, it's not mock, it's my life. That really is [my wife] Emma's mum coming in, cooking that chicken, that bad chicken."

A BBC spokesperson declined to comment on the pilot, which is not currently intended for transmission. 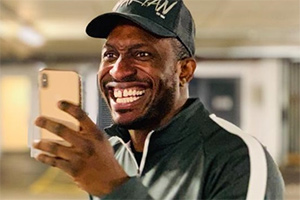