Muzlamic will explore life from the perspective of two Muslim comedians, "or rather, two comedians who happen to be Muslim."

The show is written and performed by Ali Shahalom and Aatif Nawaz.

The duo's comic creations range from politically-charged comment, to observational sketches, to characters based on their own lives. The BBC says: "Muzlamic aims to reflect the diversity of the British-Muslim experience, where being Muslim is sometimes crucial, sometimes incidental."

Ali Shahalom (better known as Ali Official), is a digital creator who's stacked more than a 100m views on his Instagram page. Aatif Nawaz is a stand-up comedian best known for his acclaimed Edinburgh Fringe comedy shows Muslims Do It 5 Times A Day and Instant GrAATIFication.

Ali Shahalom and Aatif Nawaz say: "Getting a head nod from the BBC is an amazing feeling, we're thrilled to have this opportunity. The process from page to screen has been wonderful. We've created Muzlamic in a way that gives people from different walks of life something to laugh at and connect to."

Shane Allen, Controller of BBC Comedy, comments: "Ali and Aatif are funny bones personalities who come up with really sharp ideas and observations that they characterise wonderfully. This format plays to their strengths as prolific creators who knock out really grabby ideas, we're proud to back them to wider exposure and appeal."

Chris Sussman, Head of Comedy at BBC Studios, says: "BBC Three has been the launchpad for some of the country's best-loved comedians - and with Ali and Aatif, I think there's a real chance we might be adding a couple of names to an already long and impressive list. They're great writers and even better performers, and we're delighted to have the chance to show them to the world in Muzlamic."

Muzlamic will be shown on BBC iPlayer, and also on BBC One in the new permanent slot that has been created for BBC Three programmes on the channel. 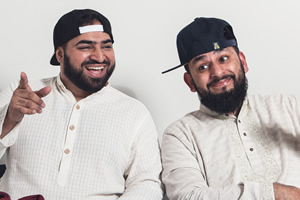