Sticky has been created, directed and produced by Ed Tracy, who previously worked on Fonejacker and Facejacker. The script has been created by a team of writers lead by Steve Burge. The show will also feature Tony Way, Tom Davis and Arthur Darvill.

The producers explain: "Although based in reality, the freedom that animation brings allows Sticky to present an unlimited range of diverse characters and epic locations. Be prepared for the weird to collide with the epic. Plus Putin and Trump make guest appearances."

Sticky will be one of the shows that makes up BBC Three's Comedy Slices pilot list, the new name for BBC Comedy Feeds. The BBC has announced a total of 12 pilots across various channels. Full list

The Comedy Slices are expected to be published online in October. 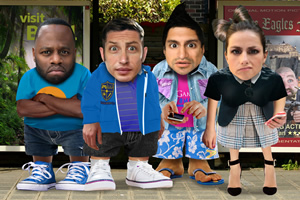