Muzlamic is a pilot sketch show exploring life from the perspective of two Muslim comedians, "or rather, two comedians who happen to be Muslim". The show is written and performed by Ali Shahalom (better known as Ali Official) and Aatif Nawaz. Let's find out more from the duo themselves:

How do you know each other?

Ali: Aatif and I have known each other for the most part of four years. We are both stand-up comedians and kept bumping into each other during shows and tours. We just really got along; there was a synergy between us. A work relationship developed into a personal friendship.

Aatif: When I met Ali for the first time, I was acutely aware that he had a huge following on social media. His content was so different to anything I'd ever made. I'd spent ten years of my life on the open mic circuit, developing the art of live stand-up comedy - so I was almost a bit snobby about it. I thought it was what happened on stage that counted. But the more I explored Ali's work, the more of a fan I became. I was so keen to learn how he did it, I loved the way he could distil a joke down and present it in a way that nobody else seemed to be able to. In his short-form video makes really engaging and likeable characters in just seven seconds! I was curious to learn that style of humour from him.

What was nice was that when we came to writing together, Ali's skills worked alongside the live stand-up and joke writing skills that I had. It's a nice mix - my stage experience and detail combined with the quickness, pace and dynamism of digital storytelling. We had a nice rhythm of writing together. I've tried to write with people before but when I wrote with Ali it was different. He's so open to new ideas and we came up with things that were a true collaboration. It was really fun. Above all else, we had a really good laugh.

Ali: We wanted to create a Muslim sketch show that was inclusive of our people, our experiences and our emotions, but presented in a way that hasn't been seen before. We knew there's an appetite at the moment for authenticity, there's a need to be represented and I feel like more is being done to encourage and develop talent. But at the time, we didn't have agents, I didn't have acting credits - initially it was just me and Aatif working on the script and sending it out ourselves. We pitched it to various places but we struck gold with BBC Studios. We went in prepared - we had this idea, we'd researched, we were ready for it and we really wanted it - and they liked it. It was a quick turnaround, a lot of work and we made it happen.

Aatif: We thought it would be great if there was a sketch show that reflected our lives and we could tell the jokes ourselves. It's difficult to tell jokes about Islam without upsetting people, being seen as too soft, pandering to stereotypes or not making it accessible. We wanted to make inclusive jokes in good taste that reflected the experiences of 3 million people in the UK. But equally it's not just for Muslims, everybody can appreciate the humour.

Ali: We realised that authentic representation can be hard to get right. People can suss quickly if the people who are being represented are really part of the conversation, or if someone else is trying to represent them. So far we've seen too much of the latter. We wanted to tell stories that were authentic and that we could be proud of.

In the media you have Muslims playing Mohammed or Muslims playing John - there's often no inbetween. So we wanted to explore the middle area, we wanted something that was a bit of both and could appeal to both. That's where Muzlamic came from.

We're two Muslim comedians, but we're also two comedians who happen to be Muslim. There are so many parts of our lives where being Muslim is actually crucial - but there are other areas where it isn't. It's the same with the show - although all of the sketches are tagged to Muslims, they can appeal to anyone. They are funny and you can find your own truth in it. We had no interest in creating a show that would only be applicable to one demographic. It's nice when comedy can do something more than just making someone laugh. We want it to bridge gaps and help communities come together.

Which were your favourite sketches in the show? 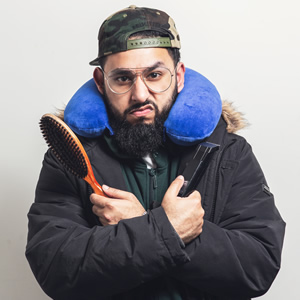 Ali: As a performer, Mabz the barber was my favourite. It's such a physical performance - it was hard to write! The voice is quite unique. Although Mabz gets everything wrong, there's a real loveable side to him.

Aatif: The Mabz sketch was my least favourite to film because it involved what felt like six litres of shaving foam being shoved up my nose! It was bad. It was really bad. I did something like 26 sneezes in a row.

There's also one in which we show what it can be like to be a Muslim actor going through a casting process. I've had experiences which have made me feel like the media isn't a meritocracy. Historically, the best ideas are not always given the biggest platforms; the best actors aren't always given the best opportunities. We've been to 'blind' castings, when we've been told it's not about race - but ultimately it becomes clear that it is about race.

Ali: It's been so great to have such a mix of sketches. We weren't interested in creating a solely political show, or even just a silly show. It had to be both. This is our lives. My life isn't always about airport interrogations or misperceptions of my religion, although that can be part of it. We wanted to include the sillier things too.

Aatif: There's no character in the show that was a pure fabrication, we took inspiration from real people and real scenarios we've seen. There are bits of reality all over it - even in the silly sketches!

Ali: And the thing is, right now it's just a pilot - but we've got so many more ideas in our heads and laptops.
Aatif: Choosing which sketch to put in the pilot was so difficult, it was like choosing between your babies! There's so much more we want to put out there.

What can audiences expect from the show?

Aatif: One of the most exciting challenges as a writer is in taking a very specific experience and making it broadly accessible. I want to tell the story of a 26 year-old Asian barber in East London and make it accessible to an 83 year-old Rastafarian in Manchester. I want to make it so that anybody who watches it can draw humour from it. From my experience in stand-up I know that people inevitably label you, but despite that you do get through to a broad audience. We don't want anybody to be isolated by anything in the show.