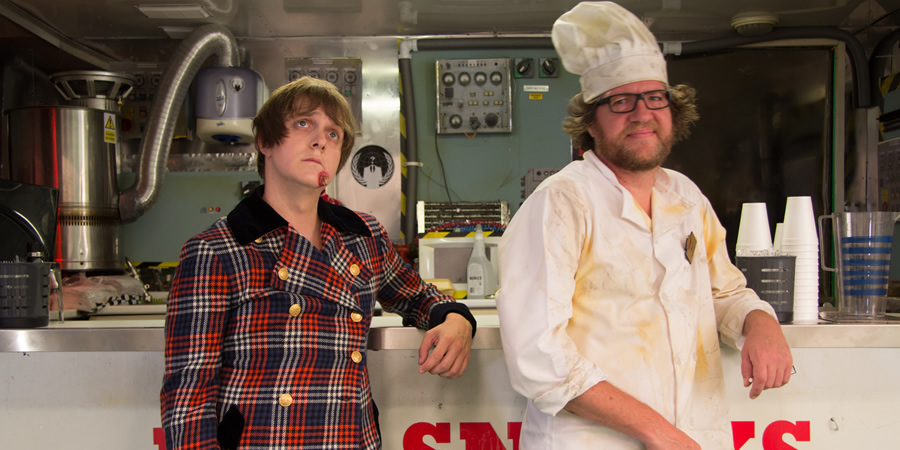 Online sitcom set in the future, focusing on two men who run a burger van

Intergalactic Sausage is "a fast and very silly sitcom with a big heart" about Joey, a young dreamer and his cynical Uncle John who will go to any ridiculous length to stop him achieving those dreams and possibly leave him behind. A nod to one of the creators' favourite classics, it's a traditional sitcom with sci-fi twist.

The time is the not too distant future. At some point, while the human race argues about what, if anything, to do about it, climate change goes past the point of no return. Earth is fracked but conditions are ripe for global revolution. The Anonymous Army wage and win an online info-tech war. One result is all coding is declared open source, causing a sudden, exponential leap in technology. Soon space travel is deregulated and a new inhabitable planet is discovered, and named after the Anonymous Army's leader. Now, anyone with the fare, and willing to risk it, can take a rickety bus into space, to a new hope for mankind, a new world, Glengreenworld.

But its here, at the plug hole to earth, Lichfield Intergalactic Bus station that our heroes struggle... to sell burgers. But Joey dreams of bigger things. If its not girls, fame or the ordinary dreams of a young buffoon that threaten the status quo for Uncle John, those intergalactic buses are a constant reminder for Joey that there is literally another world, opportunity and adventure out there for him. But, has Joey got the courage to ever escape his situation and achieve the greatness he believes is his destiny? Can Uncle John inveigle him to stay? Does, Joey truly believe he can even survive without his Uncle John? Or like the human race's relationship with the climate change, will they argue about it, until its too late?