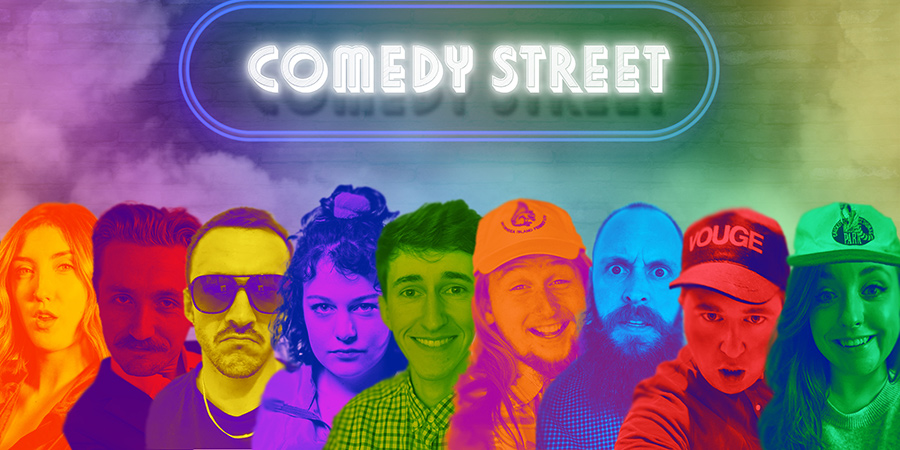 Comedy Street follows a colourful cast of comedians all vying to win the comedy medal, while navigating their melodramatic personal lives.

With new owner MC Mike Parmesan arriving in town, the pressure is on for the local comedians to prove themselves. Happy-go-lucky Cherie Trump plans to win with her lame jokes but must investigate when she's brainwashed into putting her love interest, local virgin and comedy newbie, Sam Smile, into a coma.

Meanwhile sassy best friend comedian Mitchell Thripp (a straight construction worker with amnesia) gets distracted by his attraction for Cherie's religious brother Cheristopher, while filthy no-nonsense Mary Pouncer goes for gold using her witchcraft and engages with an old flame...

Returning to win the one award she missed out on is TV star and all-round diva Penelope Diamond. But she's greeted with shocking news from her brother, old-school comedian, Russell Masters. In order to win the medal, Penelope employs shady tactics and the help of rogue alternative comedian, Toffee Phillips, with horrific consequences. While Russell tussles with the most offensive comedian on the circuit - Dog Brewster - who's barking mad for victory.

Who will win the Comedy Medal? Who is pregnant with his sister's baby? Who put all the men into their comas? Find out in the wildest, most dramatic, most comedic, zoomcom soap that's ever been made!