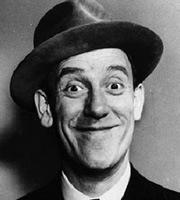 Throughout August, BFI Southbank is offering a rare opportunity to catch many of classic comedian Tommy Trinder's timeless performances and to re-evaluate his popularity as the British Film Institute celebrates the centenary of his birth.

At the height of his success, during and immediately following World War II, Tommy Trinder's jovial personality seemed to encapsulate the national spirit of good-humoured fortitude. His wartime popularity helped him conquer the big screen, and, despite his reservations about the medium, he would do likewise with television, becoming one of the foremost faces of ITV following the channel's launch in September 1955.

Trinder spent much of the 1920s singing in variety and review shows, before refining his comedy skills throughout the following decade. Bolstered by some earlier film appearances, including his debut Almost a Honeymoon (1938), Trinder's big break arrived in 1939 when he was invited to join the Arthur Askey and Richard Murdoch show, Band Waggon, then being staged at the London Palladium. This was followed in the 1940s by a string of his own shows at the same theatre. This wartime stage popularity was replicated in cinemas with a run of successful films made for Ealing Studios including Sailors Three (1940) and Bitter Springs (1950). These were largely comic performances, however, he also demonstrated his dramatic potential in such films as Basil Dearden's The Bells Go Down (1943) and Alberto Cavalcanti's Champagne Charlie (1944). Although never entirely discarding his comic persona, he nevertheless demonstrated enough acting prowess to hold his own against the likes of James Mason and Stanley Holloway.

After the war Trinder concentrated mainly on his stage act, while also finding renewed popularity on television with ITV's flagship variety show, Sunday Night at the London Palladium - which he hosted for two and a half years. Despite this success, he never fully warmed to the medium of television, believing that the amount of daily rehearsal sapped performances of their spontaneity. Nevertheless, this month's tribute season at the BFI features a number of those television appearances, in addition to many of his popular film vehicles.

To find out more about the season, and to book tickets, visit the BFI Website