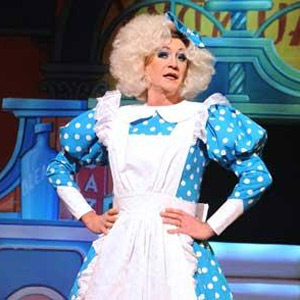 Paul O'Grady has confirmed that he will be reviving his much-loved drag creation, Lily Savage, for a pantomime at London's O2.

O'Grady, now more famed for his teatime chat shows than his stand-up comedy background as Lily, will be performing in Aladdin - A Wish Come True, an earlier version of which starred Lily as Window Twankey in Southampton over the Christmas 2010 period.

A brand new temporary 1,900-seater theatre space will be constructed under the Greenwich venue's vast roof later this year, with performances of Aladdin - A Wish Come True scheduled between Friday 7th December 2012 and Saturday 5th January 2013.

The character of Lily Savage, first created by O'Grady in 1978, rose to fame during the 1980s and 90s, and enjoyed popular success including hosting multiple series of game show Blankety Blank for both ITV and the BBC, before being retired around 2004.

Paul O'Grady said: "Lily had such a great time playing Widow Twankey last time in Southampton that I am delighted she gets to have another go and that this will be in her very own, brand new purpose built theatre at The O2 - which will be filled with the magic of Old Peking!"

Michael Rose, whose production company was behind the original Southampton production and is also staging the new London show "with added magic and gusto", added: "To have this opportunity to bring a Christmas production of this scale to London is a dream come true. Creating a purpose built theatre means we can focus on audience needs and ensure they have a fabulous time watching one of the great performers of our time in what is sure to be one of the most unique events of 2012."

Further casting details have yet to be confirmed.

Tickets will be available tomorrow