The Stockton Globe, which is currently undergoing refurbishment, has announced its first comedy gigs for 2021.

The Teesside theatre, which was subject to a long and costly refit, has confirmed that the first comedy act to appear on its new stage will be Adam Kay, who is scheduled to perform his show Adam Kay: This Is Going To Hurt (Secret Diaries Of A Junior Doctor) LIVE at the Globe on 1st July 2021... coronavirus safety restrictions permitting.

Other comedy performances coming to the venue in 2021 will include Chris Ramsey on 29th October; Jon Richardson on 20th November (performing Jon Richardson: The Knitwit); and John Bishop's Right Here Right Now, running across 26th and 27th November.

Ross Noble (pictured) has also been announced as part of the venue's line-up. He'll perform Ross Noble: Humournoid at the Globe, but dates have yet to be revealed.

The Grade II-listed Stockton Globe originally opened in 1913. During its time as been both a theatre and a cinema, it has hosted variety shows and live comedy acts, including the late Ken Dodd. The theatre is perhaps best known for its connection to music, with notable acts including Cliff Richard and the Shadows, whose track Stars Fell on Stockton was inspired by their time there; and The Beatles, who played at the Globe on 22nd November 1963 - the day American President John F. Kennedy was assassinated.

The Globe stopped putting on live shows in the 1970s, and - after hosting bingo - it fell into disrepair in 1997. 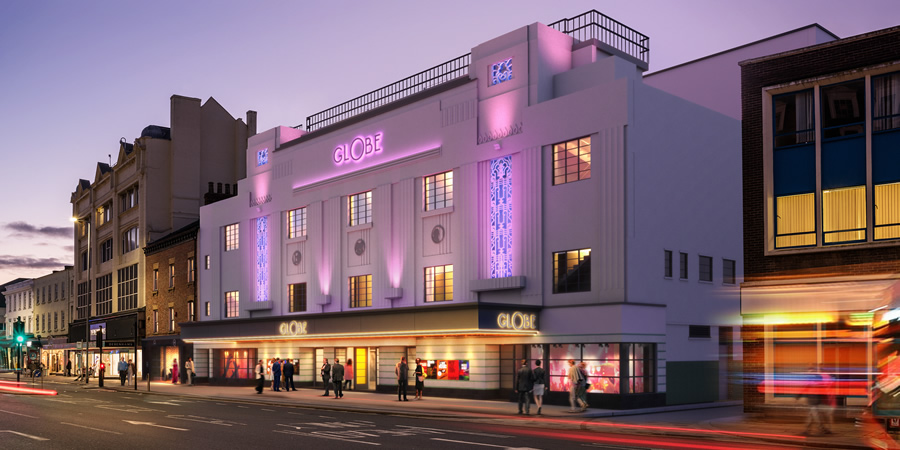 Refurbishing The Globe has taken considerable time, effort and expense. Plans started in 2011. A BBC report from November 2018 mentioned that "contractors found unsupported walls, rotting timbers, a corroded drainage system and weaknesses in the roof structure."

Funding from both Stockton Council and the Heritage Lottery Fund originally totalled £4million, with £1m provided by the council. By 2017, costs had risen to £15m. Locals have criticised the plan to revive the theatre, partly due to Teesside being one of the more economically depressed areas in the country. Other comedy venues in Stockton-on-Tees include The ARC and The Georgian Theatre.

The Stockton Globe is due to be completed in April 2021, and will be run by Ambassador Theatre Group (ATG).

The venue says: "Re-opening in 2021, after more than 45 years since the last live performance, the Stockton Globe will be a huge asset for the Borough's economy, attracting up to 200,000 visitors per year and bringing millions of pounds into the local economy each year. Its restoration is key to the development of Stockton High Street and will create the biggest live entertainment venue between Newcastle and Leeds, right at the heart of the Tees Valley."

The line-up was announced today as part of a digital industry showcase, hosted by DJ and broadcaster Georgie Rogers and Stockton Globe's general manager Jo Ager, who presented from the historic venue's stage via green screen VR technology.

Other stars lined-up to perform at the venue include Jools Holland, Midge Ure and Paloma Faith. The programme also features a Strictly Come Dancing show, and a show from dance group Diversity.

Talking about the announced programme, councillor Jim Beall comments: "The calibre of these acts speak for themselves and I have no doubt that these shows going on sale following on from the Paloma Faith and Diversity announcements will be starting to get people from near and far very excited for the Globe's reopening next year.

"It's an eclectic mix of entertainment on offer and it demonstrates just how well-suited the venue is to a wide range of performances. The momentum is building quickly as more of next year's programme gets announced and I'd encourage everyone to get signed up to the mailing list so they can avoid disappointment!"

Manager Jo Ager adds: "We're ecstatic to reveal the amazing names that we are bringing to Stockton Globe when we re-open next year. The people of Stockton know the history of the venue, but what we have planned for the future will make everyone, everywhere, sit up and take notice. This is the start of something really special; as we move forward, we will continue to focus on music, comedy and family-based performances and bringing the best in the business to our stage."

Tickets go on sale at 10am on Friday 23rd October via stocktonglobe.co.uk

Below is a VR flythrough of the venue: