The line-up has been announced for Stand Up For Jeremy Hardy, the comedy gig celebrating the life and work of comedian Jeremy Hardy.

Due to take place at London's Eventim Apollo on 25th March 2020, the show is described as "a night of comedy to commemorate the genius of Jeremy Hardy, as performed by his friends." 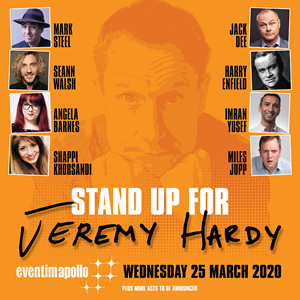 Hardy's agents Off The Kerb are facilitating the gig. They say: "On February 1st this year, Jeremy passed away from cancer, leaving not just a hole in the world of comedy but, also, a strong legacy of championing human rights, peace and political awareness. To mark this legacy, friends and fellow comedians have decided to stage this event in his memory - and provide the kind of laughs Jeremy was so much loved and famed for."

Tickets are on sale now from sites including Ticketmaster

Jeremy Hardy became a stand-up in January 1984, and went on to win the Perrier Award at the Edinburgh Festival in 1988. He later became a stalwart of Radio 4, appearing in shows including At Home With The Hardys, Jeremy Hardy Speaks To The Nation, The News Quiz, I'm Sorry I Haven't A Clue, and Jeremy Hardy Feels It.

As recently announced, a new book titled Jeremy Hardy Speaks Volumes is to be released in February 2020. Hardy's wife Katie Barlow has helped compile the 320 page book, with his long-term radio producer, David Tyler. It contains material from Hardy's stand-up routines and radio monologues as well as tributes from his friends and family.

Jeremy Hardy, who died in February 2019, was perhaps the most distinctive and brilliant comedian to arise from the 80s Alternative Comedy circuit. He regularly entertained the millions who heard his outrageous rants on The News Quiz, his notoriously bad singing on I'm Sorry I Haven't A Clue, or his hilarious monologues and sketches on the award-winning Jeremy Hardy Speaks To The Nation and Jeremy Hardy Feels It.

Often referred to as 'the comedian's comedian', Jeremy's comedy could be both personal and political, ranging in topics from prison reform to parenting, from British identity to sex. His comedy could be biting, provocative and illuminating, but it could also be surreal, mischievous and, at times, very silly. Outspoken and a lifelong socialist, Jeremy's greatest skill was that, through his warmth and humanity, he always brought the audience along with him.

Jeremy Hardy Speaks Volumes is a fitting celebration to this brilliant comedian. Containing material from his stand-up to his radio monologues and political satire to the joyfully silly gems - and curated to encompass everything about Jeremy that fans adored - Jeremy Hardy Speaks Volumes is wise, daft, outrageous, satirical, personal and, above all, very funny: like Jeremy himself.