He'll perform 38 dates of his new show Off The Telly between September and December 2019.

His promoters confirm: "Everyone's favourite grumbler, Jack Dee, is returning to the stand-up stage this autumn with his first solo tour in six years. Join Jack for an evening of entertainment (food and beverages are not included) as he hits the road with his eagerly awaited brand new UK tour, Off The Telly."

Playing on his grumpy persona, the comedy star himself says: "In these difficult and uncertain times people need hope - a ray of sunshine to brighten their day. And that's very much where I come in."

The Off The Telly tour begins in September and continues until December 2019, with 38 dates announced across the country - primarily in England. A full list of shows is below. Tickets are now on sale from venues.

The tour maybe extended. His last solo UK show, Jack Dee Live, travelled the country for 18 months to sold out audiences. Since then, Dee has performed on stage with Jack Dee's Helpdesk, a format in which he and a panel of guests take on audience problems.

"Other sidelines include Motivational Speaking, which Jack describes as 'Basically a total waste of time, talking to losers, but the cash is decent' and then adds 'Don't print that'. It's so hard to tell when he's being serious."

His biography concludes: "In recognition of his charity work, Jack was denied an OBE in 2015." 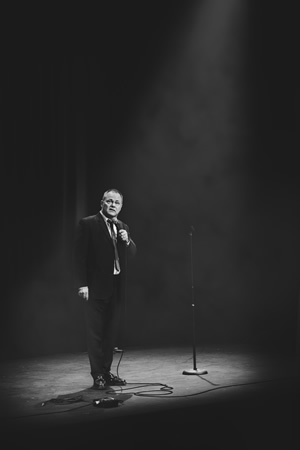