Benidorm - Live will launch at the Newcastle Theatre Royal on Friday 7th September 2018, before then touring the UK. The production is being overseen by creator and writer Derren Litten.

The producers confirm: "Litten has written an all new set of Alicante escapades for much-loved cast members as they swap sangria for stotties and head to Newcastle International next year after a quick spruce at the Blow 'n' Go."

Litten says: "I've loved ten years of writing my TV show Benidorm but despite a successful writing career I'm first and foremost a performer so have always been secretly frustrated I couldn't hear the audience's laughter. This national tour of Benidorm Live will not only make a long lasting dream come true but will also mean I no longer have to stand in strangers gardens listening at their windows at 9 o'clock on cold winter evenings."

There is no word yet on which cast members from the TV show will appear in the live version. Full casting information and tour dates will be announced next year.

A website to promote the live show has been set up at benidormonstage.com, with tickets for the Newcastle dates going on sale on 10th November.

Benidorm launched on TV in 2007, and has so far run for over 60 episodes. Series 10 of the show, which was filmed this summer, is due to be broadcast on ITV in early 2018. Johnny Vegas won't appear in the series due to other commitments, however the rest of the Series 9 cast are expected to return. Filming on the new series was completed before Bobby Knutt, who plays Grandad Dawson, passed away. 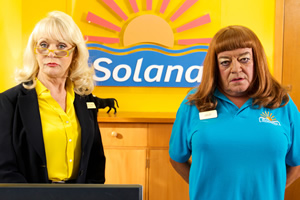