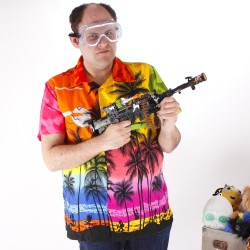 UK Pun finalist and writer of one of Dave's Best Jokes of the Fringe, Roger Swift returns with his whirlwind rollercoaster ride of non-stop corny jokes, puns, one-liners, wordplay, home-made props and PowerPoint slides. Expect a shameless wazzock telling silly jokes, going out of his way to be daft. Do not expect someone taking himself seriously with slick observational comedy or cutting-edge political satire, so groaning is encouraged. Think Tim Vine meets Lee Evans. 'He's a demented genius' ***** (NottsComedyReview.wordpress.com).