John Luke-Roberts has come up with some amazing show titles in the past, and this year's is no different. He'll be presenting After Me Comes the Flood (But in French) drip splosh splash drip BLUBBP BLUBBP BLUBBPBLUBBPBLUBBP!!. Let's find out more from the man himself...

Will your famous colourful moustache be making a come-back this year?

Yes, but she will be a different colour than previously, and that colour will be a SURPRISE (green). I plan to stick to this piece of facial brand recognition until I get thoroughly bored of it or lose my upper lip. 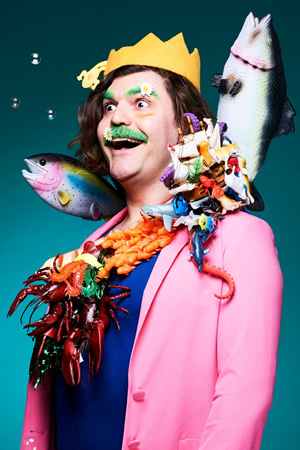 Your show is all about silliness, what the silliest thing we can expect during your set?

Oh gosh, I haven't ranked the show from "most sensible" to "most silly" yet. I generally don't do that until quite late in the process, and then cut the sensible things. Last year I did it the day before opening night and got rid of the "MOT Renewal Advice" section. It was a very dry bit which was just practical advice on checking whether your car needs an MOT renewal, and how to go about doing it.

Your show is a mix of sketches and stand-up, which do you prefer doing and why?

It would be like choosing a favourite child, and I don't have children, so I suppose that means I hate them both. NO WAIT. I have basically just smushed them together so it's a hybrid of stand-up and sketch and sort of both and neither. It took me a long old time to realise, but you don't need to strictly follow any form or any "the way things are meant to be done" guidelines. If I have a funny idea I find out the funniest way to do it on stage, and sometimes that's by acting it out and sometimes it saying "this is a funny idea, isn't it?"

So how do you come up with your show titles?

I have a bad, irritating idea for a show title, I think "well, I can't do that" and then I do it anyway.

Will you be doing any other shows during the fringe as well as your solo hour?

I'm doing my weekly Terrible Wonderful Adaptations on Fridays late night in Assembly. I get a bunch of terrific comedians and complete idiots together to adapt unadaptable things for the stage - in the past we've done the iTunes terms and conditions, Frances Fukuyama's The End of History and Roland Barthes' A Lover's Discourse. I think we may have outdone ourselves with this year's texts, though.