Ahead of bringing his new show, Garry Starr Conquers Troy, to the Edinburgh Fringe, top actor Garry Starr, the bananas brainchild of character comedian Damien Warren-Smith, answers some of our questions...

So, conquering Troy this year... that seems ambitious?

Having single-handedly saved the performing arts last year I thought it might be interesting to switch my focus to science, so I solved time travel. I did a bit of research and discovered that I'm a direct descendant of Garry Starrtacus, the Trojan man who built the wooden horse. I'm assuming he didn't realise what it was to be used for. Anyways, I thought I'd travel back and tell him not to construct it with a door. 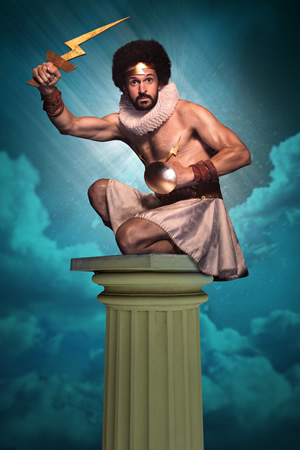 Talk to us about Pretendism.

Acting was invented by the ancient Greeks. Before that (in the times of Greek Mythogyny) everyone just pretended. And had loads more fun. All this 'Truthfulism' people are into these days is very dangerous. Not many people realise this but the word 'Method' comes from Methadone.

If you could give any living public figure a drama class, who'd it be and why?

There are so many skactors (skilled actors) that dabble in the dark art of Truthfulism that I honestly fear for their lives. Apparently, Joaquin Phoenix burns himself to crisp each night only to obtain new life by arising from the ashes each morning. This is especially dangerous in times of drought when there is a total fire ban.

How do you prepare to go on stage?

Before I even step foot on stage I like to write a show and sell some tickets to it so I know there will be people to perform to. I used to just book a space and do a thorough vocal and physical warm-up before running around saying random things for an hour. This turned out to be very expensive and not particularly satisfying. The new process is much more rewarding.

If there's one thing you'd like audiences to learn from Garry Starr Conquers Troy, what would that be?

Pretending is way more fun than being truthful. If you dedicate your life to making stuff up you too can reach your late thirties and not be tied down with friends or a relationship. It's also a great way to ensure you own very little possessions. Oops, I think that was a bit too close to the truth.