One of Australia's most respected and established clown tropes enter a macabre world of abattoir dwelling, grey nosed, genocidal clowns, hell-bent on purging the world of their red nosed compatriots. The Long Pigs is a dark comedy, as profound as it is grotesque. Clare Bartholomew, one third of The Long Pigs, talks about the show...

The show tackles some pretty heavy themes. Aside from being s**t scared, what would you like people to take away from seeing it?

The show is actually really funny and playful, as well as being scary. We see the performers tackling themes such as ethnic cleansing 'clown style' and the horror of the 'unknown stranger' to people's shores. Whilst we wanted to explore difficult themes and respond to things going on politically overseas and within Australia, we also wanted the show to resonate with people on all kinds of levels.

For example, there's a beautiful set design by Anna Tregloan - a creepy mix of a dirty abattoir and a Rube Goldberg style cannery - and the whole show is set to an exquisite soundtrack by Jethro Woodward, which is at times haunting and at others drives the action. 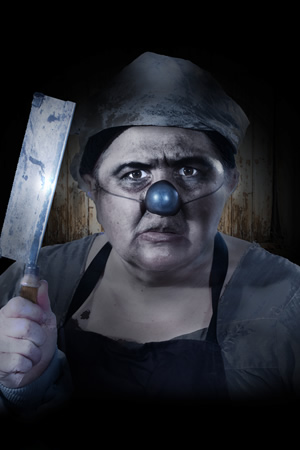 Any nightmarish clown or circus experiences as a child to tell us about?

None! But as a child I loved watching Hammer House of Horror and Roald Dahl's Tales of the Unexpected. I think they both left a deep and dark impact on me!

I remember the opening credits of Hammer House of Horror, when you think it's an angelic little girl in a white dress singing to herself sweetly, but when she turns around she has blood all over her face and she's being chewing away at a raw dead lamb...

It's that kind of spine-tingling twistedness which I think we achieve really well in The Long Pigs. Things are continuously not quite what they seem. Alliances are broken, new bonds are made, and eventually the 'gang' turns on itself in a fatally destructive ending (which you'll need to see for yourself)!

Who are your all-time clowning heroes?

I love physical comedy and daftness. I think the scene where Lucille Ball and Barbara Walters are working in a chocolate factory but can't keep up with the speed of the conveyor belt and so they start stuffing the chocolates in their mouths and under their hats, totally stands the test of time. I also loved the duality Tommy Cooper had of complete idiot silliness, to the point you could never believe he could pull off a trick, but then he would do something magical and amazing. 'Just like that' - pure clown.

What's your favourite part of performing at the Fringe?

I love seeing shows from around the world and meeting other performers and artists. My first Edinburgh Fringe I attended was in 1993! I was travelling around the world and ended up in Edinburgh as a cook at a pancake cafe on the Royal Mile. I remember on my first day the boss said if I didn't learn how to make all the pancake batter shapes on the hot griddle quickly then I'd be washing dishes the whole month.

Needless to say I became the fastest pancake maker they'd ever seen, I didn't do any dishes and spent all my money on seeing shows! It's a crazy month of performance, hopes, art, dreams and heightened emotions and I love being amongst it all (although happy to not be making pancakes now)!