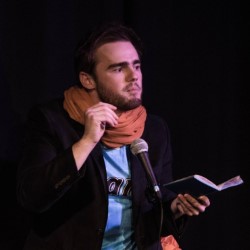 Poetry starring Will Penswick performed on the following days in August 2018...

He's the world's worst poet. Shame he doesn't know it. Sex, death, Christianity, Tim Henman, pigeons, divorce, Nazism, casseroles; no topic is too out there for Will Penswick. From one of the most enigmatic figures in modern literature, Dank Verse is a mixture of shocking (in both senses of the word; it's awful) spoken word poetry, audience interaction and Penswick's views on life, love and more often than not, himself. Voice of a generation? Umm... 'A seriously funny show and he is a very sharp performer... You will be in for a comic treat' **** (PlaysToSee.com).