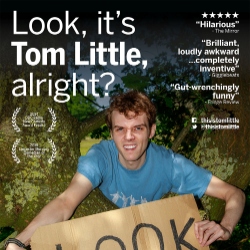 Tom Little won the Leicester Mercury Comedian of the Year 2015, was a BBC Radio New Comedy Award 2014 finalist, and appeared in both Pleasance Comedy Reserve and Big Value showcases so, you know, be impressed. This show is about toothpaste, crisps, Austria, prawns, chicken, The Beatles, two different musicals, physical violence, sausage, regret and dogs. And at least five other things. Unless he forgets a large, important chunk of it.

Clever, sharp, and with a whole host of wonderfully bizarre routines, Tom Little is a comedian who deserves sell-out shows every day of the festival. His likeable, fast-paced nature helps the time fly by whilst the laughs come thick and fast, leaving your funny bone well and truly tickled.