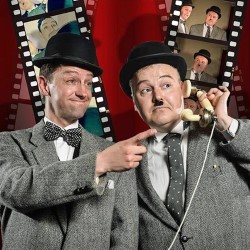 Cabaret performed on the following days in August 2018...

The award-winning Lucky Dog have been playing their successful biopic Hats Off To Laurel and Hardy since 2013. The Laurel and Hardy Cabaret, however, is a bumper package of Stan and Ollie's routines and songs from stage, screen, newsreel and record you won't find elsewhere. Featuring some classic re-created movie sequences along with some hilarious (and rare) sketches The Boys performed on tour in the 1940s and 1950s - including here in Edinburgh - you will be transported back to a more innocent time, yet be amazed how current their comedy remains. Sold-out 2017!