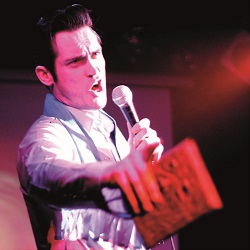 This Malcolm Hardee Award-winning show returns for a second year, polished as ever but still performed nightly with full-on commitment to the cause of retelling The Evil Dead II through the songs of Elvis. Rob Kemp's creation is absolutely niche, yet accessible, and remarkably funny.