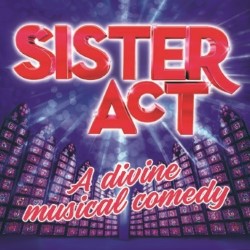 In their 19th year at the Fringe, following previous sell-out productions of West Side Story (2016) and Oliver (2015), Stage 84 proudly presents Sister Act. Based on the hit 1992 film, this sparkling, feel-amazing show features fabulous disco and gospel music by Alan Menken. Disco diva Deloris Van Cartier witnesses a murder and is put into protective custody in a convent! Disguised as a nun and using her unique talents, Deloris breathes new life into the church. She not only helps her fellow sisters to find their voices, but unexpectedly rediscovers her own. A truly moving musical comedy.