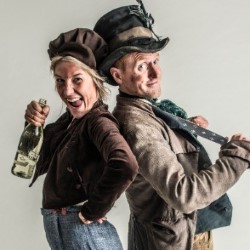 Comedy performed on the following days in August 2018...

From the pissheads behind the hit show Shit-Faced Shakespeare comes an all new cockney knees-up musical extravaganza. Dickens' classic tale of the boy who asked for more with booze, glorious booze. Witness our own version of the story, with songs from Oliver! and other Broadway hits, plus one cast member who's gotta sink a bottle or two. So, consider yourself well in, as we take you on an orphan's journey like never before! Let's get squiffy in the reign of Queen Vicky! 'Irreverent and hilarious' ***** (BroadwayBaby.com). ****½ (TheReviewsHub.com).