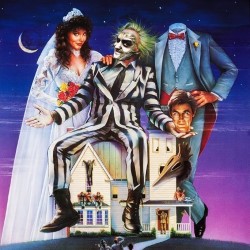 When he was seven, Edinburgh-based comedian Ross Hepburn saw the film [Beetlejuice for the first time. Far from giving him nightmares, it gave him a whole new perspective on life. And a new hero to try to emulate. In his first ever solo show, Ross explores what makes the film so popular, the role it's played in his life since he first saw it, why a seven-year-old chooses one of the undead as a role model for life - and why that choice isn't as strange as it may first seem.