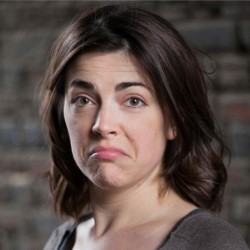 Rosie Holt is not for everyone. 'If that was my daughter I'd be ashamed' (Rosie's mum's mate). 'Don't talk about me on stage' (Rosie's Ex). But those people are idiots. The best people like it Holt. Join Rosie as she describes how her ex boyfriend 'hard-brexited' her, how a family holiday was ruined by a sexually voracious one-eyed dog and why birthdays in the office are like a 90s horror film. Work in Progress. Leicester Square New Comedian Finalist 2017. Bath New Act Finalist 2017. Musical Comedy Award semi-finalist 2017. Amused Moose Semi Finalist 2018.