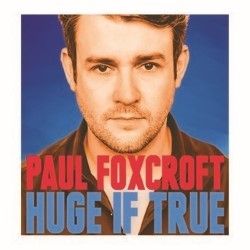 Paul Foxcroft (Cariad and Paul, Michael McIntyre's Big Show) is a professional improviser who, for some reason, has decided to script an hour's show in defiance of his many years of comedy experience. Join him! In Huge If True, Paul takes ideas we all accept at face value and look at them from a much dumber perspective. Stand-up! Character comedy! Very small scale sketch work! Huge If True has something for everyone. Except racists. 'A vibrant and articulate sense of mischief' (Times). 'Improv comedy at its very best' (BroadwayBaby.com).