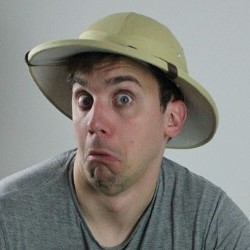 Mat Ewins has moved from Heroes @ The Hive to Just The Tonic. The show details on this page are correct, not what is in the printed programme.

288: Just The Tonic at The Mash House
Room: Just The Bottle Room

Another hour of impressive video trickery from the Fringe regular and Live From The BBC star. He's good on iPlayer, but there's nothing quite like seeing his technological achievements in person.