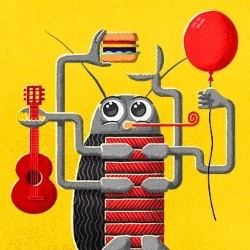 Kafka for kids? Karter thinks it's a brilliant idea. Kat just wants to have fun! And Karl wants a kebab... but someone very strange and very, very important has arrived to shut everything down. And Edinburgh Pest Control are planning on killing the show - Karl is keeping quiet because strangely, he's started growing extra legs. Kafkaesque kraziness kreated by Pappy's Tom Parry and director Russell Bolam, who return to Edinburgh after their smash-hit adaptation of Gogol's Marriage: ***** (Stage). Khaos! Kastles! Kreepy krawlies! For kids and big kids alike.

Kafka's angst-ridden stories might not seem the obvious choice for a family-friendly show, but this is a great hour for children and adults alike. The group's own adventures intertwine with re-enactments of Kafka's tales, brought to life with the most basic props, and there's a chance for some audience participation. The sketch group dynamics - the earnest one, the strict one, the one who only speaks Finnish - are crowned by the joy that radiates from the ever-hilarious Tom Parry.