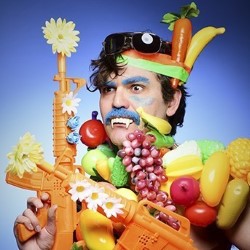 Quick, hide! The Fringe favourite returns with a brand-new hour of extraordinary absurdist character comedy nonsense. Just terrific. Blam blam! 'A show as bafflingly stupid as this should rightly divide an audience down the middle, but through some strange alchemy the crowd absolutely lap it up... a consistently hilarious hour of measured madness' **** (List). 'An hour of joyously daft character comedy' **** (Telegraph). 'This is alternative comedy close to its pinnacle' **** (Chortle.co.uk).

The preposterous title says it all. Introducing this as his 'manifesto for absurdity', John-Luke Roberts is relentless in the performance of his farcical characters and rich skits. The show is absolutely packed with gags and huge laughs rightly abound.