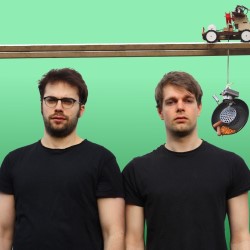 After a year building an invoicing system in Stoke, rock and roll IT consultants Pete and Lloyd are having a party celebrating the end of dBASE IV. Returning with more music, characters, and baffling tech - including an augmented reality world and an audience controlled robot chef - this is their most ambitious show yet. As heard on BBC Radio 4 Extra. Nominated for the Chortle Award for Innovation and two Malcolm Hardee Awards in 2016. ***** (Skinny). **** (List). **** (Time Out).

As the title suggests, Foxdog have created a Robot Chef which the audience finds itself in charge of via an augmented reality world. It's a truly unique experience in terms of the technology and there's some brilliantly understated comedy to boot. All you need is a fully charged phone and an empty stomach.