The charity special on the 21st August will be a spin-off from Werewolf: Live, the immersive comedy game show format starring Jon Gracey. A theatrical reimagining of the classic game of deception, it sees audience members brought on stage to 'hunt down the werewolves'.

Whilst the main show (which runs late-night at Underbelly during the festival) stars people plucked from the audience, the Charity Spectacular! will involve comedian guests. 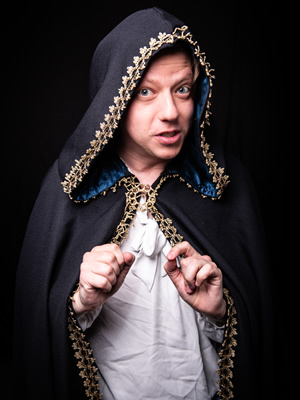 The show will also see a sort-of reunion, as Tom Houghton is on the guest list, as is The Noise Next Door, the improv group he left to pursue a solo stand-up career.

Further names are set to be announced, and the show will also feature a famous comedian who isn't being named in the publicity.

Talking about the show, the producers explain: "For one night only, Werewolf: Live - Charity Spectacular! will be taking over Udderbelly for a special show featuring comedians playing the comedy game show Werewolf: Live. It's an hour of intrigue, backstabbing and mob rule in which the innocent villagers must fend off the two-faced werewolves before they get torn limb from limb."

The charity special is raising funds for Kidney Research UK, a cause close to host Jon Gracey's heart. He says: "My dad has had two kidney transplants, so Kidney Research UK is an important cause for my family.

"My brother ran the London marathon for the charity a few years ago, but I can't run for shit so I prance about on stage in a cape instead. Kidney disease can strike anyone at any age and there's no cure yet, so we're hoping to raise a big chunk of cash."

Talking about adapting the format for the special, Gracey adds: "Introducing comedians will put a special spin on the show. Think The Wrestling, but with less physical prowess and more petty grudges."