Figure skating champion turned comedian Roman Fraden has a show at the Edinburgh Fringe this year titled Back in the Closet.

Why do you have to go back in the closet?

My dilemma: I want men, and I want them badly. Usually heterosexual men. Recipe for disaster? OF COURSE!

A lot of stand-up material in this current show has to do with the epic backfiring of these pointless pursuits, and with the ways in which I often collide with the culture and lifestyle that comes along with it.

Being a comedian, I take license to shamelessly expose and analyse my own 'behaviour' in life while on stage, and this has always been the driving force behind so much of my particular brand of humour. I take some of the most fascinating and unusual aspects of gay culture, and of human sexuality in general... and place them under a highly magnifying comedic microscope to unearth their deepest mysteries. Oooph. 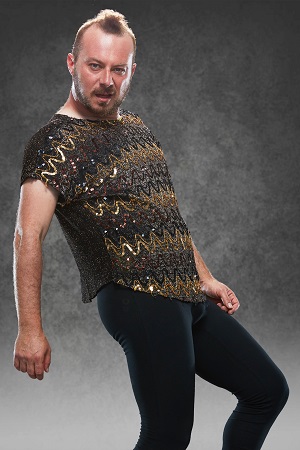 It's at times self-deprecating, brutally filthy and honest... but ultimately at its core it's simultaneously a celebration of those very same things. Most people (regardless of their sexual orientation) go to hell and back many times over trying to 'find love' or 'just have sex'... so the core themes of this show definitely resonate strongly with all audiences.

Sometimes I am more driven and ambitious in my attempts at 'making something happen' with a hot straight guy with a Viking face than I ever was at winning the Olympic gold medal as a figure skater. It's pretty crazy, the lengths to which I'll go to achieve 'success' once I've decided that I really want to be with a particular dude, and it also turns out to be a treasure chest of comedic material.

Back In The Closet is an uncensored roller coaster ride through all of these escapades, and a penetrating takedown of myself, modern culture, and my own hedonistic urges and endless quests to fulfil them.

These themes took over so much of the material on my most recent US comedy tour that the title Back in the Closet came quite naturally in the end. If you end up seeing the show, you'll understand just how entertainingly insane it has been for me to try and just be a regular, sexually active gay homosexual... almost to the point where it makes me want to go 'back in the closet.' Almost. I never will though. I'm thoroughly, deeply obsessed with all of the men.

How did you make the jump from figure skating into comedy? Did you land ok?

Oh, it was so easy! I never thought that it would be, but when the time came it was the most liberating release imaginable (leaving my old life as a championship ice skater).

At the time, competitive figure skating seemed like the only life worth living, far cooler than anything else I could imagine. I had been pretty isolated during my early days, not only because of skating but also having been raised by slightly emotionally-blocked, Russian-Jewish immigrant parents who seemed to only appreciate classical music and academics.

Within about a year of quitting skating, I had discovered psychedelic drugs, mind-blowing and inspiring new non-skater people, finally listened to mind-expanding staples like The Beatles and Pink Floyd (I was really isolated), and very quickly became part of a huge underground full moon desert techno party cult scene for the next decade.

That new world was so dense with fascinating and inspiring characters who rocked my world and took me on a whole new path in life, that I never looked back on figure skating even for a second. Comedy only finally came many years later, but all of these different chapters from my past life really contributed to the insane tapestry of my material.

Are we likely to see Tonya Harding or Nancy Kerrigan in the front row of your shows? Do you have them on speed dial?

I'll be honest... I prefer Tonya over Nancy. She was always a whirlwind of drama and problems, had a crazy mum and husband, but sooo much more fun to hang out with than Nancy Kerrigan and is welcome at my shows anytime.

I don't want to give too much of Back in the Closet away, but I can tell you here that I was in the actual building when the attack on Nancy Kerrigan happened. I was unlacing my own skates in the dressing room when suddenly all of the security people went running down the hallway because there had been 'an incident'. Just the previous night, Tonya and I were playing billiards in the lobby of the hotel in Detroit, and she cool as a cucumber.

Was Tonya Harding involved in the plot to club Nancy Kerrigan in the leg the next day, and take her out of the competition? Come on. The answer to that one is about as obvious as 'Did Donald Trump work with Russia to cheat the election'...!

I feel like Tonya wouldn't travel all the way to Scotland to see comedy, she works doing building construction now in Portland Oregon (I know, funny where life leads you sometimes?!), and Nancy is I think too uptight to visit a late-night, filthy and outrageous comedy show like mine. But you never know, I'll ask! 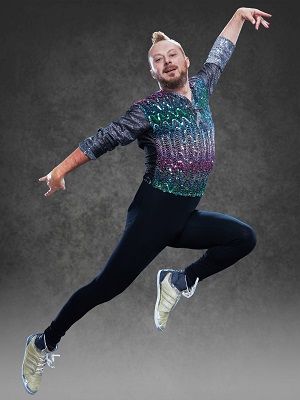 Which British comedians would you most like to take into your closet?

OOH, that's a good one!
Ok, here's who I'll take:
Sacha Baron Cohen
Jack Whitehall
Russell Brand (he could use some good time in the closet)
and, Benny Hill (obviously)

You have a thing for hot Viking faces? Tell us about that?

Attractive male face comes in many different forms, but 'Viking face' in particular strikes some sort of 'medieval battlefield' brand of sexuality that I just can't resist. It's difficult to explain what 'hot Viking face' (HVF) really is, and I've found that different people have their own interpretation of it based on their own particular Viking fantasies (yes, everyone has them).

For me, it's dark hair (not too short), light eyes, a solid confident nose, flared (but not too much) nostrils, strong eyebrows, and a really really big... brain. You're getting turned on reading this, aren't you? You know how sometimes you're watching Game Of Thrones and think to yourself 'OK, that person is verrry hot'... it's basically THAT.