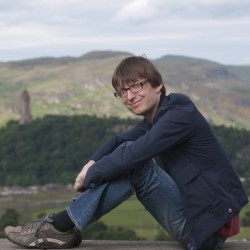 David Kay, one of the hidden gems of the Scottish comedy circuit, quirky, surreal, surprising and awesome... Kay's laidback, gentle and original style has won him many fans. Kay has taken scone based comedy to another level. As seen on Comedy Central's The Alternative Comedy Experience and heard as Modrin McDonald: 21st Century Wizard on BBC Radio 4. 'Kay arrives looking as though he should be in an art school indie band yet talking as if he's a senior citizen' (Scotsman). 'Reminiscent of the deadpan American surrealist Stephen Wright... wonderfully improbable...' (Scotland on Sunday). Sconetastic awesomeness, www.david-kay.com