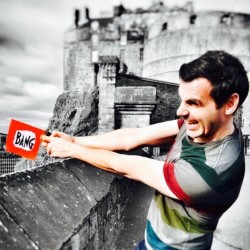 Daniel Downie takes an irreverent look at Edinburgh's history that's more hysterical than historical. Why do they fire a massive cannon every day at lunchtime? Is there really a strip club named after a pair of brutal murderers? Why did they mark the spot where people were burned alive with a well? Is all of Scotland as middle class as this? The 2 O'Clock Gun is everything you needed to know about Edinburgh and everything you didn't want to know about Daniel! 'Up-to-the-minute material that had the audience in stitches' (MumbleComedy.net).