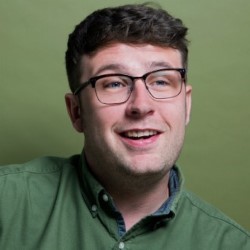 Edinburgh Best Newcomer nominee, Chris Washington debuts his brand-new show about the best year of his life! Including receiving the prestigious 10 years service tie pin from Royal Mail and the series of 'You Beauty!' moments that followed. A feel-good underdog story about a Wigan postman who used all his annual leave to take a show to the world's biggest arts festival and got five numbers and the bonus ball on the comedy lottery. As seen on Live from the BBC. Jason Manford tour support. 'A revelation' (Chortle.co.uk). 'Funny, relatable and heart-warming' (BroadwayBaby.com).

Chris Washington's second show is just as brilliantly funny as his Newcomer nominated debut show. It's the heartwarming tale of how an unexpected star has had a brilliant twelve months and caused a Royal Mail walkout in the process. Full of stories, from handling the Comedy Awards with no management (just four blokes from Wigan), to having doors answered by the unexpected as a postman. Chris's show is a real treat and one to keep an eye out for as he goes from strength to strength on the comedy ladder.