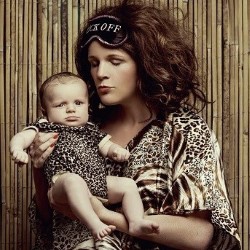 The mother and baby show, like you've never seen before! She's tried everything to get back on daytime TV, but she's never gone this far before... Britain's number two in the morning, leopard-clad daytime presenter Olive Hands returns to the Fringe, and this time she thinks she's cracked it! 'Funniest thing I've seen at the Fringe' ***** (BroadwayBaby.com). 'This show has cult written all over it, a formidable comic actress' **** (Chortle.co.uk). 'Most gigantic idiot on the Fringe' **** (Scotsman). **** (Skinny). **** (Stage). **** (ThreeWeeks).

What goes on behind the scenes of your favourite breakfast television programme? Join Olive as she bravely battles with low ratings and missing guests, using everything and everyone she can to save her job.