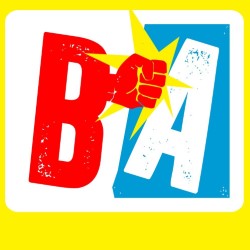 As heard on BBC Radio 1! Winners: VAULT Festival People's Choice Award. BattleActs! is an award-winning, multi five-star comedy show that has performed to rave reviews around the country. The show sees two teams of fearless improvisers pitched against each other by a ball-busting compere. Each team attempts to prove their worth and battle it out for the ultimate prize: the audience's respect! With games and tasks created to push our players to their physical and mental limits, expect quick wits, big action and no mercy.