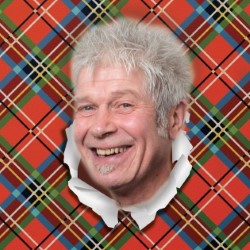 Following Fringe sell-outs in 2015 and 2016, and a successful tour of Australia and New Zealand, Vladimir McTavish returns to The Stand with a brand new topical show. After another political rollercoaster of a year, 'Scotland's top satirical stand-up' (Morning Star) takes an irreverent look at where we go now. With the world in turmoil and Britain in flux, what does the future hold for Scotland? Here's tae us! Wha's like us? Who are we? 'Topical barbs and neat twists on Scotland's culture' (Scotsman). 'Inspired comedy brilliance' (Australian Stage).