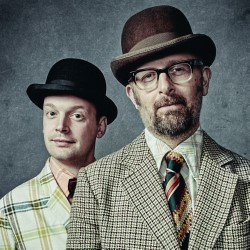 Side-splitting, stiff upper-lipped hilarity from energetic duo Dan Lees and Neil Frost. Two ultra-privileged British gents struggling to hold onto their whimsical world of cricket, tea and secret arms deals. 'Another much-needed chapter in our national legacy of lampooning the powers that be, building on Peter Cook, the Pythons and The Fast Show... You can imagine this going down very well indeed at the Palladium or the BBC' **** (Stage). 'They don't miss a beat' **** (Skinny). 'One of the best shows I've seen' ***** (MumbleComedy.net). NATY New Act of the Year finalists 2017. www.establishmentcomedy.co.uk