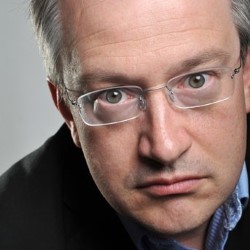 64: Gilded Balloon at the Museum

Presenter of BBC's Rose d'Or award-winning Infinite Monkey Cage gets excited about goats on canvas, matchstalk men and holes in pelvis bones in a show probably about art. Expect a frenetic hour where Robin tries to explain why he likes staring at art and the best overheard conversations are in art galleries. From Georgia O'Keeffe to Robert Rauschenberg via Stanley Spencer, Robin will attempt to translate the thoughts in his head into spoken words. 'The Zoolander of reasonably priced knitwear' (Brian Cox). And he has a new book out, I'm a Joke... and So Are You.