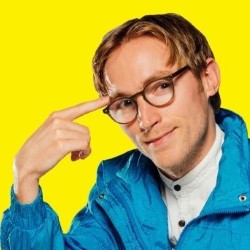 Christopher Bliss writes two to three novels a day. He's fairly well known amongst his family and friend, and he's pretty sure he's the best writer in his village. One of last year's 'hidden treasures' (Fest), Rob Carter's loveable character is back with a new hour of unique storytelling and literary blunders. 'One of the best character shows we've seen for a long time' (Comedy.co.uk). 'Consistently pant-wettingly funny' (Fest). 'This is a fresh, original show and one of the gems of this year's fringe' (FringeGuru.com).

Christopher Bliss (played by Rob Carter) is a terrible writer... he doesn't even seem to understand what a novel is. However, as a result, the five chapter story about a school boy that he's sharing with audiences at The Voodoo Rooms (mixed together with his general musings on how to write a good book) is brilliant. There are some huge laughs in this very clever show.