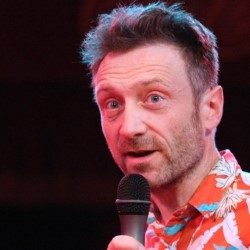 Master of wordplay Richard Pulsford has his choice Phrases Ready, with wordplay, jokes and puns aplenty. As seen at Prague Fringe. You can interact and join in with the daily hashtag themes via #PhrasesReady on Twitter. Finalist in Leicester Comedy Festival's UK Pun Championships 2014-17. 'Strong material' (Chortle.co.uk) including some 'ruthlessly economic nuggets' (The Guardian). 'Delivered a number of puns I wish I had thought of myself' (Gary Delaney). 'Richard's experience shone through as he delivered a series of solid top quality puns' (GiggleBeats.co.uk). 'Richard has more one-liners than a joke machine on overdrive!' (Patrick Monahan).