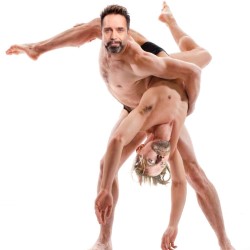 Take a deep breath, purse your lips, blow as hard as you can. Feel that? That's NightDanger. Hold your neck, then squeeze until you pass out. Moments later, your eyes open. That feeling? NightDanger. Antoine and Phillippee with leg-rock and motion-sensored emotional vicissitude, do for dance what Richard Gadd did for comedy. 'Like birds in oil slick' (Kate Copstick). 'Absolutely shit' (Stewart Lee). Note: All money from this performance goes to help the NightDanger Movement Training Centre in their fight against the council housing refugees in the empty flats above the NMTC. Fight the power!