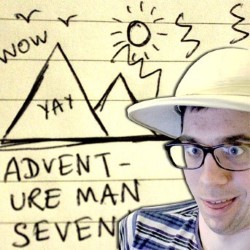 Mat Ewins has clearly worked really hard to put this show together. Seriously hard. As one example: he's programmed a computer game for an audience member to play for one of the many varied multimedia segments of this wonderfully upbeat show. Tickets have already sold out, but hopefully he'll consider an Adventureman tour.