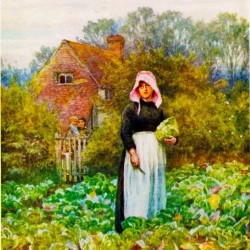 'Traditionally, unmarried maids were sent into the vegetable garden to choose the perfect cabbage' (Anon). Bonkers storytelling with a heart and an elusive cabbage. Trapped in a dysfunctional household, will an Edwardian(ish) maid's devilish streak ruin everything or will the cabbage save her? Debut solo show from half of sketch duo LetLuce. 'Brilliantly playful... marks Lucy out as something rather special' (LaughOutLondonComedyClub.co.uk). 'Lucy Pearman is so very endearing to watch and an integral feature of pioneering new comedy in a big way' ***** (FunnyWomen.com). 'Genuine comedy talent, subtle, straight and seemingly completely crackers' ***** (TheGoodReview.com).

In this brilliant character comedy, Lucy Pearman is an incompetent maid in search of a perfect cabbage. Occasionally her dark side is unleashed in the most inventive costume on the Fringe. Cabbage aficionados can expect plenty of audience interaction and lots of laughs.