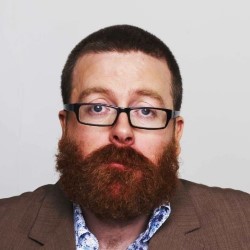 Frankie presents the first instalment of his eight volume Promethiad. If you liked his previous shows, but wished they contained different jokes said by someone with an older face, this is the show for you. Subjects ranging from the science of black holes to the history of Victorian exploration will be ignored entirely. Frankie knows that his only legacy is to have his books and DVDs form part of gasoline soaked warning pyres lit to alert the Last Ones that their foes the Crabmen have begun their final sideways march out of the sea.