A quick disclaimer for this edition of Rogue Pun (our series in which comics talk about comic-book stuff), assembled during the 2017 Edinburgh Fringe: the good news is that these chats happened just before Marvel's latest team-up TV show The Defenders splurged onto Netflix, so there are no spoilers if you haven't started/finished it yet.

On the other hand, if you've no interest in superheroes, a lot of the words below might be slightly baffling. Or they'll open a portal into a whole new world. One of the two.

The two comic-loving comics I've asked about Defenders and all things onscreen-Marvel are Andrew Roper, who travels the world performing an ever-mutating show called Superhero Secret Origins. And Tiernan Douieb, host of the Partly Political Broadcast podcast and whose latest live show, Miserably Happy, features a thoughtful bit about how superheroes currently fill a moral hole in society. Plus we particularly wanted to ask him about The Defenders as he super-binges these shows and is that rare beast: a fan of Iron Fist.

Tiernan met me in an Edinburgh pub under a mirror like something from Superman's Fortress of Solitude, Andrew chipped in via email, and I then persuaded fantasy illustrator Hazelgee to rustle up an exclusive Defenders pictures for us, which she did the very same evening. Excelsior! 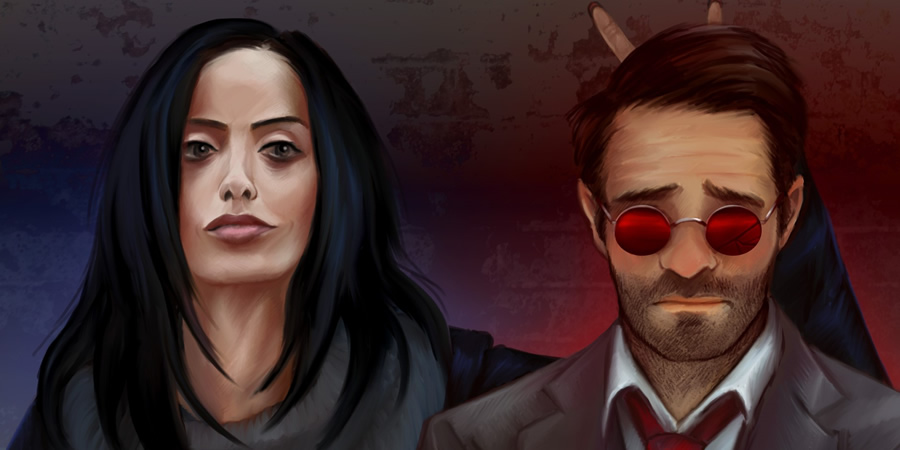 Andrew, how did you start doing these superhero shows?

Andrew Roper: It started three years ago, and grew out of wanting to share some of the stories behind these characters that we're all being bombarded with. Most people know who Spider Man is, but they don't know much about Stan Lee or Steve Ditko, or Bill Finger or Marvel in the 60s.

Likewise, the feminist history of Wonder Woman and her creators made a whole show [for me] in 2016. The idea is that if you have a passing interest you will have a laugh and leave with a 'wow, I didn't know that' look on your face.

Tiernan, how are you feeling about The Defenders? Pumped? Nervous it won't live up to the hype?

Tiernan Douieb: I AM SO EXCITED! I'm almost gutted that I'm up at the Edinburgh Fringe while it's on as that means I can't binge watch it in a day! The trailer looks like they balance out the characters perfectly and it's great how Jessica Jones's 'give a shit' attitude and Luke Cage's fearlessness seem to balance out [Iron Fist actor] Finn Jones still being annoying. Think it'll work really well.

It's so exciting that Marvel are finally at a point where characters can team up like this, it's exactly what everyone who's ever read any of the comics has been waiting for, for ages.

What did you make of The Defenders trailer, Andrew, and how do you rate the TV versions of those heroes?

Andrew: The Defenders drops in the middle of the Fringe, which means late night bingeing. In some ways there's a similar vibe to when The Avengers came out, mainly because when it was announced years ago that these characters would actually be in a show together, it was hard to imagine. Spider Man was always going to get attention, but to think that Luke Cage and Iron Fist are finally together is amazing.

The TV versions of these characters have so far been excellent - seriously, go back to Daredevil's appearance in The Incredible Hulk TV show to see how far we've come - with perhaps Iron Fist being the only stumble. But personally I have faith that Power Man [aka Luke Cage] and Iron Fist is one of the best comic book pairings ever, and having the others around will lift Danny Rand.

Plus Luke Cage and Jessica Jones have a history, and Iron Fist once stood in for Daredevil... so they all have a history together. 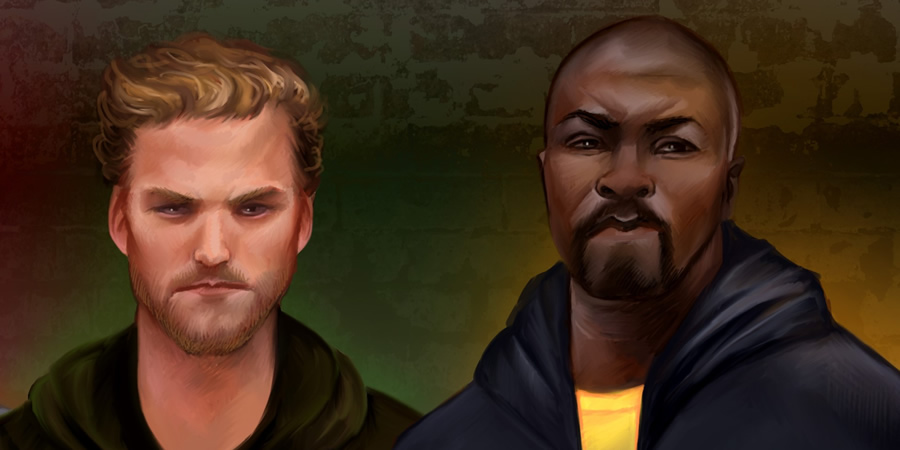 Tiernan, tell us about your contentious Iron Fist opinions...

Tiernan: I'll hold my hand up, or maybe fist up, and say I liked Iron Fist. Not loved it, just liked it. In the way that I have a terrible bias for enjoying all Marvel films and TV shows because it gives me that temporary escapism where I'm watching a world where good and bad is clearly defined and people are allowed to punch Nazis.

I liked that bit in your show...

Tiernan: But I can totally understand why people hated Iron Fist. Firstly the fight scenes were filmed badly so you never really saw the action properly, Finn Jones is a really annoying privileged character that doesn't have the same inner turmoil or humour that humanises other Marvel characters, certain episodes really dragged and of course there is the whole whitewashing issue where people were rightly angry that it was another rich white guy as a lead character, basically Tony Stark without armour.

Oh and having a glowing fist isn't that great power-wise. It just sort of looks like he's spent a lot of time alone.

But saying all that, Iron Fist in the comics is amazing so there's potential for him to become less annoying, the Hand and Madam Gao are awesome villains, David Wenham is a great bad guy and Colleen Wing was excellent. 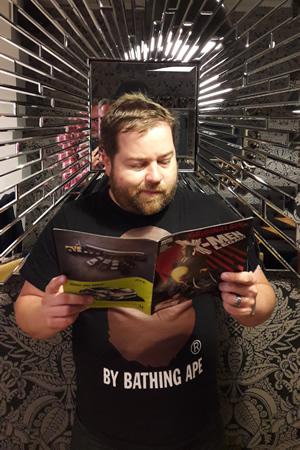 I quite enjoyed the first few episodes, then he joined the company and I thought 'that's that then'...

Tiernan: Yeah I can see why you quit watching there. I think it's episode eight that is directed by RZA from the Wu-Tang Clan and there's some good action in that one. Also, The Hand become more involved and they are basically evil ninjas, which is the sort of thing everyone wants right? Evil ninjas are up there with 'space pirates' or 'robot vikings', or any other combination of words that makes the part of me that hasn't changed since I was 10 get excited.

All those Marvel series are 13 episodes and I always think if they were 10 episodes it'd just bounce along much better. Defenders is only eight episodes so you know that's gonna basically be what we want - endless awesome heroes punching things - all the way through.

Andrew: There are lots of superhero movies, but that's just the nature of something that's successful. I think at the moment Marvel are working hard to differentiate each film. But personally I think that if a character demands an origin story, then do an origin story.

When you think about it, any movie that introduces a new character is an origin story. Once you get past the costumes and the powers, they're no different to Harry Potter or Star Wars, just because they carry the label superheroes doesn't make the bottom line any different.

Tiernan, can you talk us through your binge-watching of the various Netflix/Marvel series?

Tiernan: I'm proud/sad to say that I've nailed most of the Netflix series within two days, with a need for sleep getting in the way. I've sadly/proudly specifically made a point of not booking in gigs on the Fridays the shows are released just to give me more watching time. The only one I couldn't watch in two days was Luke Cage which was really upsetting but it was due to tour gigs that I had booked in before they announced the release date.

So that one I watched over about four days. I wish Marvel would do some sort of scholarships or grants you could apply for so you can viably take days of work to sit and binge watch their shows.

How would you rate the various series then?

Tiernan: Order wise I reckon it's Daredevil season two first as introducing the Punisher was amazing, then Luke Cage (it trailed off a bit towards the end or I'd put it first), Jessica Jones, Daredevil first series, then Iron Fist last.

It's hard to say though as I loved all of them and parts of Daredevil season one were amazing, especially that first hallway fight sequence which was like angry ballet. Though Iron Fist would always be last. Probably forever. 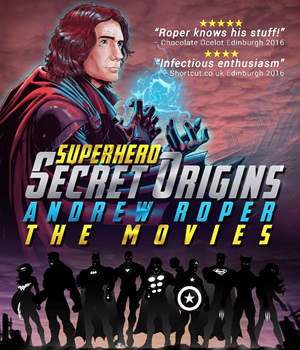 Any thoughts on what Sigourney Weaver is up to?

Tiernan: No idea who Sigourney is playing yet, but I love that she's the villain. Who better to play a villain than a woman who's singlehandedly taken on acid spitting aliens?

All the best Marvel series are the ones with really good, fully 3D villains. You have to believe they are a threat so the show has jeopardy. I'm pretty sure Weaver can be incredibly threatening without much effort. I'd be terrified of her if she asked me for directions.

Andrew, are there particular heroes you'd like to see enter the Netflix universe, and the movies?

Andrew: The Marvel Cinematic Universe is obviously crying out for the Fantastic Four, but who knows if that will happen? Even on a cosmic scale someone as obscure as Rom the Spaceknight... at this point there's nothing that Marvel can't make work.

On the small screen there's characters like Moon Knight, or Shang Chi, Master of Kung Fu, smaller characters who would fit right in. I mean, there was an outcry that Danny Rand should have been Asian... but Marvel have an Asian character like Shang Chi waiting in the wings.

As an actor yourself, Tiernan, is there a Marvel part you reckon you'd be a perfect fit for?

Tiernan: Sadly I don't quite have the hero physique for a lot of roles. I reckon, with only being 5'5" too, I'm hoping they do a TV series of the Canadian superhero team Alpha Flight then I can get a role as Puck. He's very short and hairy and very bouncy. Seems almost a perfect fit I reckon! Though I'm not sure his spandex outfit would suit me that well...